Home > About Us > Tribute To Our Founder

Joanne Marie Chiaverini was born on April 18, 1940 to Giovanni and Mary Chiaverini; she was the youngest of three children. Joanne’s father was born in Italy and after being abandoned by his father went to trade school in Naples. He became a skilled blacksmith and tool-and-die maker, starting a workshop in his hometown. Joanne’s mother was born in a coal mining camp in Colorado where, later, Joanne’s grandmother ran a boarding house for miners. After her grandfather’s death, Joanne’s mother went back to Italy and married Joanne’s father. Joanne was very proud of her Italian Heritage and had a life long interest in genealogy and family stories. She was proud of her Big Brother Roger known as the “Godfather of Western Michigan High School Football” (in the first group of the Coaches Hall of Fame) and her Big Sister Theresa Oehmke, who earned a doctorate in Math Education and developed teaching labs for struggling math students, a model used across the country.

Joanne’s vocation was planted by her mother who walked to Holy Redeemer Church in Detroit for mass every day and who had great devotion to the Mother of Perpetual Help. Mary Chiaverini said that when Joanne’s birth was immanent and something of a surprise she told the Mother of Perpetual Help, “If this one turns out normal I give this child to you.”

Joanne’s parents both worked hard to help settle new immigrants (finding the Italian store, Italian priest, and how to become a naturalized citizen). Her father protested the UAW not representing African American auto workers. That sense of caring beyond the family was deeply nurtured into Joanne.

Joanne knows more than most of us the meaning of the Gospel words “Leave Father, Mother, brothers and sisters to follow me” because in those days when you joined the Immaculate Heart of Mary Sisters you would never go into your house again; you had to choose whether to go to your mother or father’s funeral, you could never eat in public. Entrance day September 7, 1957 was the first time Sr. Joanne saw her father cry. In fact Joanne’s sister Theresa recently told her that he sobbed so hard that his older daughter had to drive home from Monroe. But at the same time he’d say to Joanne “Be strong”. When Mary, Joanne’s mother was given the bag containing her graduation dress and heels she remarked to Joanne – “You look like an old lady. You’ve seen the place… now come home.”

When Joanne was given the name “Giovanni” her father’s name, at her profession her folks began to accept her call.

For both Joanne’s 25th and 50th Jubilee celebrations her Bible quote was from Jeremiah: “Before I formed you in the womb I knew you, before you were born I dedicated you. To whomever I send you you will go”.

She describes her years at St. Agnes Detroit (where the riots happened) as her real novitiate. The reason she was assigned there was “She could drive a stick shift.”

At 5:30 a.m. Mother Josine every so often used to tap Joanne on the shoulder and whisk her away to drive to the railyards, saying, “You can miss prayers today. We have to get free bananas from the box cars for our poor kids’ lunches.” She taught Joanne how to beg for the poor. In that same parish Joanne went by herself to have religion classes in the tenement houses on Philadelphia on Saturday mornings. When her pastor, Fr. Granger, heard she was doing this he exclaimed “Sister, for the love of God, what are you doing there. I can’t find 10 men brave enough to go there to take a census, they are too scared.” 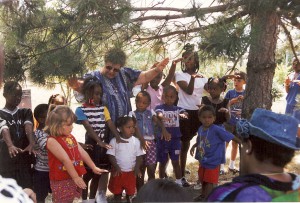 A shrewd businesswoman, Joanne was with a dear friend Dr. Jack Stanzler and me in the old market in Jerusalem. Joanne exclaimed I need to buy some crosses for my family and friends. She began the dance of bargaining and Jack and I could see we were in the presence of a master. The merchant began with his price and she began with less than half. Then they began in earnest.

“For you, for you… You think I am a hustler… you have mysterious eyes, you have beautiful eyes”. She countered with “but I need seven of these crosses, I’m a poor sister, etc.” Finally she sealed the deal and the 3 of us walked up the narrow street a block or two away. “Oh,” Joanne, said, “I forgot chains. I’ll get some in here.” We were way down from the original store; she selected seven chains and approached the counter; the same man jumped up to bargain with her – “I boss here, too,” he exclaimed – and they began all over again.

As friend Art Swirtz once remarked – “Joanne has great ability to beg, borrow, and… make good use of her tax exempt status.” Nothing at the Prayer Center was ever paid for at the regular rate.

Two other stories illustrate Joanne’s passion to follow the words of the IHM’s co-founder Louis Florent Gillet who said “I desire to be everywhere when I see so many needs.”

At the Prayer Center Joanne saw a young child on our yard swing. “Can I help you?” she asked. Fourth grader, Leroy said:

“I’m never going home” and told stories of terrible daily beatings. “I saw God on your sign and need your help.” She offered to make chicken soup and fried balogna, Leroys favorite meal, but he wouldn’t eat. When Protective Services came, they raised his shirt and we saw his stripes. He knew his brothers and sisters had to be removed, too. He couldn’t eat till Joanne said, “Leroy – If I have to go to jail – I guarantee you will never go back in that house and we will get your brothers and sisters out, too.” Then he felt safe, ate his lunch and the worker came back with his siblings to take them to a safe home.

The St. Francis Prayer Center Joanne founded in 1974, was involved in environmental justice issues on the North Side of Flint where the poor were being environmentally abused. Hearings were in white suburbs. We agitated and finally got a hearing at Carpenter Road School but the hearing room was full of armed guards. She was a witness that the poor were treated differently (armed guards) in the hearings compared with middle class in suburbs (no armed guards).

A courtroom can be an intimidating environment. In the long environmental trial Joanne kept describing how the poor were treated differently. She told her story – no matter what the attorneys asked. When she was in the ladies room she over heard the other attorney (we affectionately called “The Dragon Lady from Chicago”) yell “What am I going to with that damn nun!” Joanne has always been gifted with speaking truth to power and many have wandered “what to do with that damn nun.”

Joanne loved to have fun fishing, playing cards, enjoying children and doing crafts, and going to election headquarters where votes were counted to help her favorite candidates.

Joanne, we are grateful that in 1845 Louis Florent Gillet and Mother Theresa Maxis founded the IHM order and that you answered your call in 1957.

And we, from Flint are especially thankful that you served most of those years in the Flint Area. We thank you as our waitress, shepherdess, prophetess and anchoress.

Joanne, IHM, Auntie Jo, Aunt Josie, Gio we commend you to the saints who dwell now in light eternal.